Determination of blood alcohol concentration (BAC) is needed in a multitude of situations, including driving under the influence (DUI), workplace drug monitoring, probation investigations. The term “driving under the influence” is used to describe the impairment of driver’s ability to operate a motor vehicle safely. DUI is characterized as one of the most important situation of Alcohol effects that records thousand deaths per year. Cyprus had the worst performance in EU regarding the average annual percentage change in the number of road deaths over 2001-2010 period, with a staggering 18% increase compared to an average EU decrease of 2.3% . For this reason, the development of methods and products for detecting alcohol consumption by drivers, is of major importance, leading the driver to a conscious decision of not driving under alcohol influence.

IREDA is a national funded DIDAKTOR program (POST-DOC/0718/0186) under the ‘RESTART 2016-2020’ funding grands of the ‘Research & Promotion Foundation’, that aims to create a portable blood alcohol concentration (BAC) detection prototype device, by advancing the state-of-the-art in non-invasive infrared optoelectronic sensing. The project implementation will provide the technological basis for future CyRIC products that help alleviate the critical socioeconomic problem of DUI, a problem particularly evident in Cyprus where alcohol-attributed road deaths had the highest increase in Europe during the last decade.

CyRIC role is to develop the first portable touch-based alcohol detection system, that uses tissue IR spectroscopy, combining NIR and MIR bands for BAC measurement. This implies the development of the hardware parts consists of, the ‘optical excitation-sensing’ and the ‘mixed-signal electronics’ subsystems, including the development of the software application with data analysis models and visualisation. 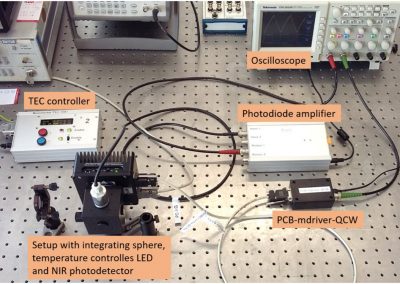 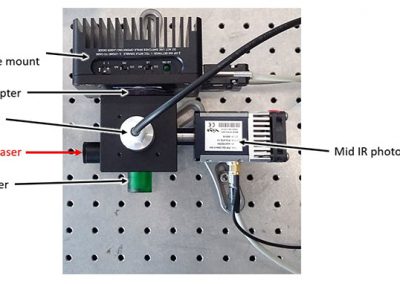 Optical setup to test the components and to do first measurements.

This website uses cookies to improve your experience while you navigate through the website. Out of these, the cookies that are categorized as necessary are stored on your browser as they are essential for the working of basic functionalities of the website. We also use third-party cookies that help us analyze and understand how you use this website. These cookies will be stored in your browser only with your consent. You also have the option to opt-out of these cookies. But opting out of some of these cookies may affect your browsing experience.
Necessary Always Enabled
Necessary cookies are absolutely essential for the website to function properly. This category only includes cookies that ensures basic functionalities and security features of the website. These cookies do not store any personal information.
Non-necessary
Any cookies that may not be particularly necessary for the website to function and is used specifically to collect user personal data via analytics, ads, other embedded contents are termed as non-necessary cookies. It is mandatory to procure user consent prior to running these cookies on your website.
SAVE & ACCEPT